So, yeah…it’s true. It happened. After Two. Long. Years.  We all knew it would, right? We finally caved to our fur-loving alter-egos. We welcomed a new little bundle of joy into our homes with wide-open arms and slightly wagging tails… er, tail.

We got a puppy.

See, what ha’ happened was…

Two Fridays ago I picked Victoria up from school and asked if she wanted to go home or ride with me to get Aaron. She opted to ride with me if we could stop for drinks somewhere along the way.  She felt like Starbucks. I, on the other hand, did not feel like dropping Andrew Jackson on our afternoon snacks.

“How about we stop at a gas station and get some ICEEs?” I happily suggested. On a hot, sunny day I can take one for the team, high fructose corn syrup be damned.

“At a gas station?” She wrinkled her nose and gave me that disgusted-teenage-girl glare.

“Where the hell do you think ICEEs come from, missy?” I broke the seal on cussing in front of my kids several years back.  Hey, it happens.

“Gross, Mom. But whatever.”

Oh, please. I can count on one hand the number of times she has turned her daddy down for a ride to the First and Last so she could return with an ICEE big enough to deliver a four-day sugar shock.

“Good. ICEEs, here we come,” I said and pressed the accelerator.

Minutes later we were pulling into a parking spot at a quaint little neighborhood gas station on the way to Aaron’s school. As we approached the door, we saw a handmade paper sign taped to the window: “Free puppies. Husky/Lab. Beautiful pups,” followed by a phone number.

Now, truth be told, even though I am a Lab lover through and through, whenever we first spoke of the potential for another puppy in our home, Dom’s heart was set on a Husky. After some discussion we dismissed the idea, both knowing that our climate is too hot for a Husky’s comfort.  But, I think the thought of getting a Lab was too close to what we had lost and might only serve to enlarge the Mason-sized hole in his heart.  At the end of our conversations, we decided not to think on it anymore and just let whatever would be, well…be.

“Oh, Mama,” Victoria crooned as her eyes grew wide and a smile spread over her entire face. “Daddy wants a Husky; you want a Lab. I think Jesus has the wheel on this one!”

I snickered as I snapped a photo of the sign and prepared to text it to Dom. “Let’s make sure your Daddy wants Jesus taking the wheel on this one,” I said.  With that, we went inside and got our ICEEs.

Ten minutes later we were at the high school waiting for the bell to ring when Dom called my cell phone. Vic had been tirelessly texting him since he got the photo from me. I answered the phone and heard a small chuckle.

“What’s this all about?” he asked.  “Where are they? How many do they have? Do you know how old they are?”

He was giving a considerably better response than the Hell No I was expecting, so I said, “Let me make a phone call and I’ll call you back.”

I called him back minutes later to relay that there were two litters born roughly a month apart, maybe fourteen weeks ago, and brought to Shreveport from Canada as wildfire refugees.  There were only two males still available.  One was black with white speckles and one was solid white.

“Hmm,” Dom replied before a long silence. “Well,” he continued finally, “if you come home with a puppy tonight, make sure it’s the white one.”

I hung up the phone and Vic gave me a high five. When Aaron got in the car I told him we were going to look at puppies. He let loose with a loud groan and the announcement that he didn’t want another dog. What was up with my moody children on such a sunny Friday? I shoved an ICEE at him and told him to buckle up.  We made the six minute drive to the House of Puppies, Victoria chattering and Aaron groaning the whole way.  At a stop sign, I looked at Victoria and said in all seriousness, “Prepare for this to not be the dog for us, okay? We have to have a code phrase, something that means we are going home empty handed and I don’t want to hear crap about it. Understand? If I say, ‘I just don’t know how Mabel will react,’ that’s the code. That means my answer is no and we are going home. Do not fuss, whine or beg if I say I don’t know how Mabel will react. Just get back in the car. Got it?”

“Yes, ma’am,” she said, even though the irises of her eyes had already turned puppy-shaped.

I pulled into a neat driveway and we walked up a manicured side yard to a backyard guest house. On the porch were nearly a dozen rolling, bouncing fur balls. The black and white speckled male jumped up wildly as we were greeted by the man to whom I had spoken on the phone.

“You said they’re from Canada?” I asked, hoping for clarification on how they got to Shreveport, of all places.

“My sister lives in Canada,” he explained. “She owns two huskies that got impregnated by the same male Lab a month apart.  The pups were born and then the wildfires spread closer to them, and they couldn’t deal with all these pups and evacuating themselves too. She called me and said her husband was going to drown them. I told her to get those dogs to me and I would find them good homes. And here they are.”

He pointed out the two males and I said we were interested in the white one, which was actually more ivory than white, and evidently from the younger litter. My heart smiled when he picked up the little pup by the scruff and handed him to Victoria. The puppy licked her face and snuggled contentedly against her neck. I beamed at how much he looked like Mason did at that age. So cute.  Just a ball of buff-colored fluff and ears. Victoria eyed me closely before asking dramatically, “So, Mom, what do you think Mabel will think of him, huhhhhhhh?”

“I think Mabel will like him just fine,” I said through a tight grin.  After thanking the man and promising him that I would continue with puppy shots and deworming, we got in the car and drove home. I called Dom from the car and announced in my best Armageddon movie voice, “Houston, our crew is all present and accounted for.  We’re even heavy one cosmonaut.” 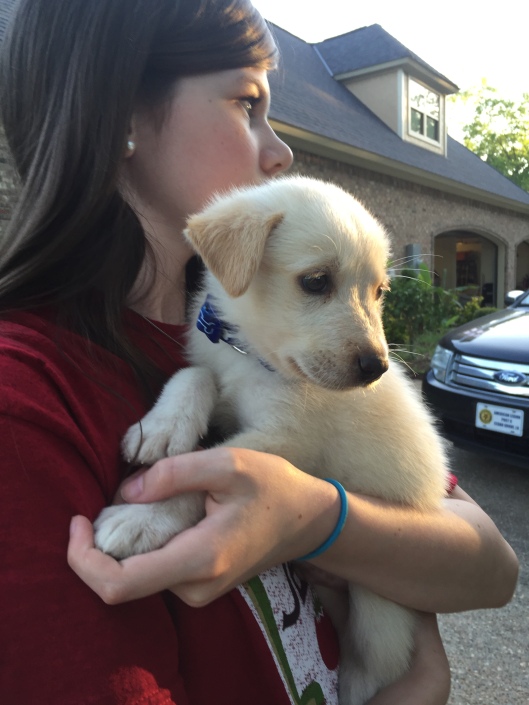 The puppy roamed all over Victoria’s lap as we drove. “Is his name Max?” Vic asked me.

“Of course it is,” I replied.  I mean, duhh. Everyone knows I name my dogs years before they are born. Our Mason was named after a Steven Seagal movie character long before he was even a tiny yellow embryo. Next, we sought a black Lab and named her Mabel for the sole privilege of yelling out the back door, “Hey Mabel, Black Label!”  And, in my days of wanting the Labrador Trifecta I had planned to add a Chocolate Lab to the mix and name him Mocha.  Three M’s, five letters each – hey, I’m nothing if not OCD.  But once Mason was gone, I no longer wanted the Trifecta and, not believing I would have another Lab, my brain rummaged around for a new name.  And that’s when I settled on Maximus. As in, the Gladiator. So, yeah, my pups are named after two movie bad-asses and a 1940’s beer ad.  Priorities, right? Aren’t you glad I used other methods in naming my children? Better yet, aren’t my children glad?

“So, what’s his middle name?” Vic asked a day later.

Her face screwed up as she bellowed, “What?!”

“He’s Commander of the Armies of the North,” I continued in a squeaky voice as I scratched Max behind the ears, the voice primarily for his benefit. He gave several enthusiastic licks that said he’d gladly be Commander, as long as the army was made entirely of chew toys.

Victoria stared at me, dumbfounded. “What the heck does that even mean?!!”

That, my dear, means it’s time for you to sit down and watch this movie with me.  Let’s make some popcorn first.