Don’t worry…I’m not pathetically weepy this week. We are healing. We are slowly adjusting to life with one dog. Mabel is healing, too. She’s different now. Pensive. Surprising.

So here’s the story: From my family’s perspective, cardinals represent our deceased family members checking in on us, at least since my grandmother’s passing in 1996. Rumored to have been her favorite bird, the cardinal became synonymous with her spirit in the eyes of me and my mom. When my grandfather passed away in 2004, my uncle reported a flock of cardinals in PaPa’s backyard. Mom and I thought that a fitting representation of my grandmother calling him home.

The one exception I personally hold for this bird-spirit thing is blue jays, which remind me of my cousin, Sam. It was a blue jay who sat on a tree branch above me and sang on the morning Sam left our midst. I think Sam would have liked that he has his own bird. 😉

My dad embraced the cardinal thing when his last pup died. Now he and Mom both watch for cardinals and report on their backyard bird activity with great respect.

Even though we see cardinals flitting about in the field across the street from our home and even though I have kept a bird-feeder filled, we have never had them visit our yard. I attribute this long-standing absence of birds to Mabel and her stellar lack of hospitality. But yesterday Dom told me he saw a cardinal trying to eat from the bird feeder I recently relocated! Even though I had just cleaned and refilled it, moisture had reached the seeds and clogged the spout through which the seed is made available, so the cardinal wasn’t able to eat and consequently did not stick around. My bird feeder is cute as a button but rather meh on functionality. I cleaned it out again and put it back on the hook in hopes that the birds would return.

One of Mabel’s new quirks is that she doesn’t want to go outside alone.  It was no different this morning, so she ate breakfast in the kitchen while I made coffee. Then we ventured to the back patio together where we spied TWO cardinals playing in the yard, toward the back of the property and sort of near Mason’s grave. I froze, not wanting to scare them, and immediately looked to see Mabel’s reaction. She froze, too, ears perked. I was so afraid she was going to charge the birds. But she surprised me again as she quietly sat down beside me and watched the birds play, a new softness in her eyes. This is Mabel, people. Mabel. I can’t even lie…I started crying.

“Those are Mason’s cardinals, aren’t they, girl?” I asked in a whisper.

Her left ear twitched and four seconds passed before she charged, though quite a bit gentler than usual. The birds flew away and Mabel sauntered back to lay beside my chair.

But I think those beautiful red birds must carry some of Mason’s spirit with them, because one came back to visit the feeder at the edge of the patio. And Mabel let him. 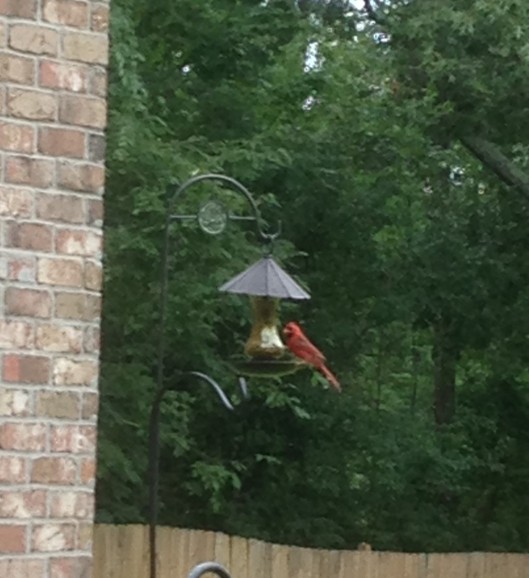